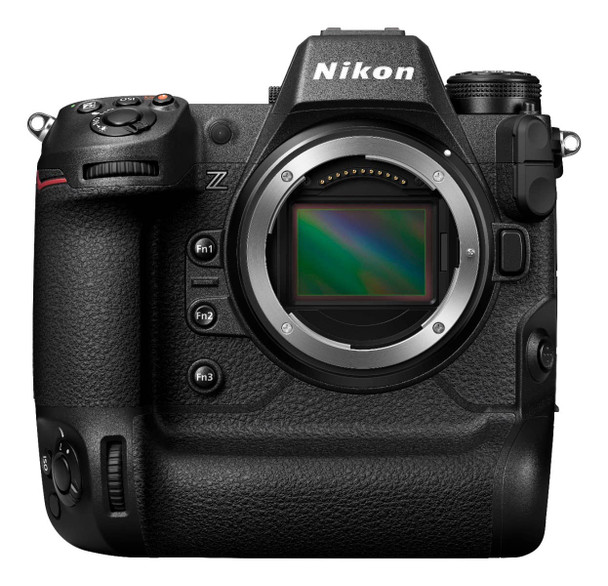 The Z 9's precise AF is the result of three technologies: an exceptional 120 cycles per second AF calculation speed, intelligent subject detection designed using deep learning, and rapid, the continual transmission of AF information between the lens and the camera body through the Z mount. These technologies work together to provide better AF tracking performance for irregularly moving targets, even when shooting at fast speeds. In low-light circumstances, the AF algorithm is also designed to pinpoint moving subjects with confidence. Furthermore, because the AF on the Z 9 is controlled separately from the live-view exposure, it can provide powerful AF even in backlit settings.

The Z 9 features a sophisticated algorithm created utilising deep-learning technology to produce dependable AF for a wide range of subjects, detecting the world's widest range of 9 subject groups. When photographing human beings, the camera can identify and concentrate on a person's eye even if it is small in the frame, which benefits in cropping the image. It can even focus on the eye when wearing goggles or sunglasses, or when turned upside down. In a dynamic circumstance, such as when a gymnast executes a somersault during a floor exercise and the AF loses sight of the face, detection will automatically change to the head or upper body, keeping the subject in focus. For wildlife photographers and photography lovers, it also identifies birds, motorbikes, bicycles, vehicles, and aircraft, as well as cats and dogs, letting you focus on your shot composition rather than the focus of the camera.

Persistent tracking lets you focus on the best moments — 3D-tracking

3D-tracking has long been recognised for its performance with Nikon D-SLRs, and the Z 9 introduces it to the Z series for the first time. It continues following a topic, such as a racing car that gets close and then drives away quickly, or a fast-moving athlete, when combined with deep learning subject detection.

The Z 9 features Nikon's innovative stacked CMOS sensor with 45.7 effective megapixels, allowing for approximately 12 quicker readouts than the Z 7II. The world's fastest scanning speed allows for the reduction of rolling-shutter distortion. It implements a design that does not require a mechanical shutter, allowing for silent release at any time and for a wide range of applications.

The image processing engine is at the heart of a mirrorless camera's performance. The new EXPEED 7 image-processing engine is Nikon's most powerful ever, taking full advantage of the stacked CMOS sensor's capabilities and about ten times faster processing speed than the Z 7II to boost overall performance to a whole new level. This engine is unusual in that it accomplishes the Real-Live Viewfinder while also accomplishing high-performance AF, 8K in-camera video recording, 4K/120p, and other advanced capabilities by processing dual-streamed data from the image sensor separately.

Photographers can shoot even in bright sunlight and may encounter difficulty confirming the subject using electronic viewfinders. As a result, the Z 9 features a revolutionary Quad-VGA display with customisable brightness adjustment up to 3000cd/m2. This helps you to see your subjects more clearly via the viewfinder, whether if you're shooting on a beach in the summer or a snowfield in the winter. Furthermore, the Z 9's EVF has a lower display size option for individuals who use glasses and want to see the entire frame.

Connect with every moment in motion — Real-Live Viewfinder

Decisive moments in sports photography are frequently hidden within the smallest fraction of a second. Photographers follow each movement via the viewfinder with continuous shooting to capture these moments, but there is always a split-second image that they can't see — whether with mirrorless or DSLR cameras. The Z 9 is the first camera with a viewfinder that displays every single moment — including those previously obscured by standard electronic viewfinder systems and the loss of view caused by DSLR mirror-up. This allows you to effortlessly confirm every athlete's movement and locate the ideal times.

Nikon's dual-stream technology, made possible by the new stacked CMOS sensor and EXPEED 7 engine, processes LiveView images (including EVF views) and still photographs to be captured separately. The Real-Live Viewfinder is achieved by this unique live-view image processing, which provides a seamless vision that displays every single second.

When it comes to capturing the exact moment, such as a high diver's fingertips hitting the water or a tennis ball temporarily deformed by the force of the racket, the Z 9 now provides Higher Frame Capture+ with AF/AE tracking. You can take about 11-megapixel still photographs at 120 frames per second by rotating the release mode dial to the rapid release-mode setting and selecting C120. This improves press coverage by displaying incredible, previously unseen moments that would otherwise be lost between the frames. The C30 can shoot around 45-megapixel photos at 30 frames per second.

One of the NIKKOR Z's most appealing features for photographers is its exquisite bokeh, which is free of aberration even when the aperture is wide open. The Z 9 expands the possibilities for commercial and fashion photographers even further. When combined with ISO 64 capabilities and a shutter speed of 1/32000 sec., it enables the use of the maximum aperture of fast NIKKOR Z lenses such as the NIKKOR Z 50mm f/1.2 S and f/1.8 S prime lens series even in bright areas such as the beach or snowscapes.

The most practical 8K UHD/30p — the world’s longest, at over 2 hours of in-camera recording to help you capture the decisive moment.

Because of the increased demand for 8K video, professional shootings using mirrorless cameras are becoming increasingly important. The Z 9 is designed to address such requirements by offering really practical 8K video capture. It effectively dissipates heat, allowing you to shoot 8K UHD/30p video in-camera for up to 125 minutes. 8K UHD/30p video exposes astonishingly crisp detail from edge to edge because of the incredible resolving capability of NIKKOR Z S-Line lenses and complete pixel readout. You can now record H.265 (HEVC) 10-bit and 8-bit video and choose the colour gamma among SDR, N-Log, and HLG according to your needs. elect "auto" subject detection to have the camera detect any of these subjects without changing settings - useful when you need to switch subjects quickly. Not only that, but the algorithm for AF speed [-5] and [+5] settings has been modified to meet the needs of filmmakers. It can now track a wide range of subjects, from those moving slowly to those moving quickly. Furthermore, the "AF drive for when the subject is not detected" option can be turned to "off," allowing you to keep the focus position in settings when the subject is briefly concealed.

With 4K UHD/120p, in-camera video recording for up to 125 minutes is also available. Without cropping, you can create stunning slow motion in full-frame. In 120p, a 2.3 crop format is also available, allowing you to get closer to your subject without switching lenses. Furthermore, in-camera recording in H.265 10-bit and 8-bit at any frame rate is feasible, letting you select the format best suited to your post-production needs.

In terms of video recording, the Z 9 offers electrical VR, in addition to in-camera VR and Synchro VR. Image blur caused by camera shake in handheld photography is more powerfully compensated thanks to EXPEED 7, allowing for recording while walking. It can also correct trapezoid distortion, which is typical with wide-angle lenses.

The Z 9 includes a number of features that assist in the seamless and error-free operation of filmmakers' workflow. In the 8K and 4K videos, the razor-sharp focus is essential. Zooming is available during movie playback pause for the first time in the world to confirm focus in-camera and on-site. Manual focusing with the NIKKOR Z 70-200mm f/2.8 VR S is comparable to those of cine lenses in that the focus adjusts exactly according to the rotation angle. To make it easier to discover the right point during playback, the camera enables you to specify how far you want to skip — either by seconds or by frames — by using the main/sub-command dial. Meanwhile, the zebra pattern can signify "mid-tone range," which is useful for determining brightness on human beings. HDMI output has lower display delay than conventional models, which is useful for filming a video with external monitors. Additionally, 24-bit Linear PCM audio recording is now possible, allowing for higher production values.

Nikon's flagship cameras have always been designed with both vertical and horizontal shooting in mind. The 4-axis tilting mechanism in the Z 9 allows photographers to tilt the LCD 90 degrees upward and 43 degrees downward in horizontal mode, and 90 degrees upward and 23 degrees downward in vertical mode. This adaptability broadens the range of possible angles and opens up a world of creative possibilities.

Professional operability in an approx. 20% smaller body than the D6

For professionals, it's critical that their camera has a well-thought-out button and dial structure that helps to minimise operating errors, as well as a variety of programmable buttons. With that in mind, the Z 9 is designed to meet those expectations while being 20% smaller than the D6. The dedicated AF mode button lets you switch between AF modes and AF area modes without having to take your eyes away from the viewfinder. Buttons for playback are conveniently situated for quick access with your right thumb in any orientation. Furthermore, the three function buttons on the front are placed with adequate space between them to prevent accidental operation.

Enhanced reliability over the D6 for rugged use

The Z 9 provides D6-equivalent enhanced robustness, including dust and drop resistance even when the tilting monitor is removed — but it goes a step further. The front and rear covers are made of magnesium alloy and are merged with the bottom for even better heat dissipation. Furthermore, a VR lock stops the sensor from losing accuracy due to swaying during bumpy off-road travel during animal shootings. Furthermore, the lack of a mechanical shutter eliminates the need to worry about shutter wear or breakdown, allowing you to shoot a large number of photographs with ease.

MSRP:
Now: $4,295.00
Was: $4,989.00
The new VICTORY® SF from ZEISS allows you to experience the most exciting hunting moments as never before. The optical perfection, the unparalleled field of view, the revolutionary ergonomics...

MSRP:
Now: $478.00
Was:
Perfect for Travel The Sony DSC-HX90V is a premium compact that combines a high quality image sensor with a powerful zoom lens. An ideal travel companion, the HX90V is the perfect blend of...