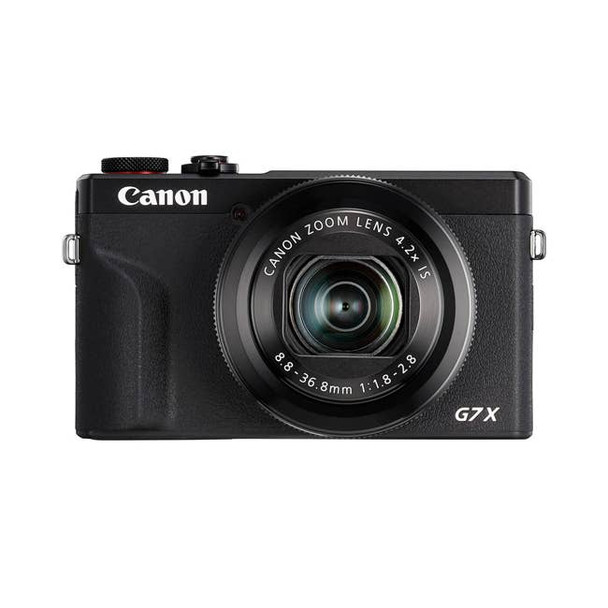 The Canon Powershot G7x Mark III adds some great new features like slow motion video recording at up to 120p in Full HD, 4K video, large 3-inch touch LCD so you can review your shots, as well as a new 30fps RAW burst and 0.5 pre-burst shooting modes. With lightning fast performance, the G7 X makes exciting new imaging possibilities a reality, which combined with an innovative stacked sensor design make it one the best compact cameras you can buy. Available in two colours the pocket sized compact camera has built-in Wi-Fi and Bluetooth so you can easily share your images and videos online.

With the G7X Mark II Canon debut a new style of CMOS image sensors for their compact range. The 20.1-megapixel 1-inch sensor has an innovative stacked design that repositions the circuitry to achieve super-fast readout speeds. This performance boost allows the capture of 4K 30p video, super slow motion 120p Full HD footage, as well as improving the quality of the images captured.

Using the same technology as their popular EOS-R range of mirrorless cameras, the G7X III uses the Impressive DIGIC 8 image processor. This not only enables high resolution and slow-mo video, but also the burst capture of RAW stills at a striking 30fps using an electronic shutter, as well as pre-burst function that captures a 0.5 seconds of RAW images before you even press the button, perfect for those hard-to-time shots.

With a highly versatile f/1.8-2.8 zoom lens, the bright aperture creates images with a soft depth-of-field, and at the same time captures more light. The camera’s 4.2x zoom allows you to frame shots in a variety of creative ways, ensuring you can capture everything from a wide cityscape to far away details with the flick of a button.

ISO speed relates to the sensitivity of the sensor, the higher the number the brighter your shot can be in super-dark conditions. The ISO range of the G7X M3 has been extended to an impressive 25,600 when shooting stills and 12,800 when recording video.

The G7x III has an adjustable rear LCD screen that tilts up 180° and down 45°, perfect for selfies and vlogging. The screen is touch sensitive so you can tap the screen to take the shot or change your focus point. Even reviewing your shots is faster because the touchscreen allows you to swipe between them easily, just like on a phone.

The G7X M2 can record Full HD slow motion video at an impressive 120 framer-per-second, twice as much as previous models, so you can capture silky smooth motion of fast-moving subjects. The camera records 4K video with an ultra-high resolution of 3840x2160 without any crop, has a microphone input and offers live streaming capabilities direct to YouTube via Wi-Fi.

The Canon G7X Mark 3 maintains a constant low energy Bluetooth connection to automatically send images to your mobile device, as well as a Wi-Fi connection that can be used for live-streaming and remote control of the camera. This makes it a perfect camera for vloggers, streamers or anyone who wants a quality camera that is also small enough to take with them everywhere.

Compact. Powerful. Fast. The EOS M5 features the brilliant image quality you can expect from the EOS line of cameras, in a lightweight, portable design with fast autofocus and processing...

MSRP:
Now: $1,048.00
Was:
Compact. Powerful. Fast. The EOS M5 features the brilliant image quality you can expect from the EOS line of cameras, in a lightweight, portable design with fast autofocus and processing...

MSRP:
Now: $1,518.00
Was:
Compact. Powerful. Fast. The EOS M5 features the brilliant image quality you can expect from the EOS line of cameras, in a lightweight, portable design with fast autofocus and processing...

MSRP:
Now: $5,299.00
Was:
What distinguishes the CP.2 from its PL-mount-only predecessor is its interchangeable lens mount, which allows the included Canon EF mount to be easily swapped out for an optional Nikon F or...

MSRP: $2,960.00
Now: $2,391.00
Was:
The lightweight view into the distance High performance hidden behind compact dimensions and lightweight design - that is the beauty of the Conquest range of binoculars. As the entry model into...

MSRP:
Now: $819.00
Was:
uilt with travel in mind, the Black Panasonic Lumix DMC-TZ110 Digital Camera is a versatile point-and-shoot marrying both form and function. Designed to be as sleek as possible, the...